What the Bible teaches about Adultery


This article will be a brief look at what the Bible teaches about adultery when it comes to marriage. Let's start with the most obvious.

So we can see from the above that the man who is intimate (has intercourse) with another man's wife is guilty of adultery and the woman who is married commits adultery if she is intimate with another man. The woman must be married before intimacy constitutes the sin of adultery. Both the man and woman are guilty together. Adultery is a mixing of seed (sperm)(DNA) of the husband and another man. Lawfully it constitutes a breaking of the marriage contract. The most basic definition for the word adultery or adulteration is "to mix". Think of mixing when you read the word adultery.

Christ restated the Law in Matthew.

Malachi 2:14-16 and Matthew 5:31-32 were dealing with men who were putting away their wives without the cause of adultery (mixing seed with another man) and not giving them a writ of divorce. What ever else may have been going on the women were not guilty of adultery. Malachi 2:16 and Matthew 5:32 do not even deal with divorce. Men were dealing treacherously or vindictively with their wives. Unless the wife could go to her parents and not remarry she was relegated to living in the streets without food or housing. If she married in order to survive then she and her new husband would be stoned as adulterers for she and her first husband were actually still married. This is evil in the sight of God and a violation of God's Law for the original husband. The first husband shared in the guilt because he caused her adultery to be possible.

Let me quickly cover Matthew 5:31 and 32. There is much confusion here because of a mistranslation. Here is the verse in the King James version which is copied in many translations. Some translations even make it worse.

The word divorced above in red is a mistranslation. G630 is also used in verses such as Matthew 14:15 and 14:22 when the scripture says "Send the multitudes away". The multitude was not divorced. In verse 22 they became physically separated from Christ. Now here is what Matthew 5 should say based on the Greek.

Let me show you how Matthew 5:32 might look in today's standard English based on what the Greek actually says:

32 "But I say to you that whoever shall separate from his wife, except for the cause of fornication, causes her to commit adultery. And whoever shall marry her who is only separated commits adultery."

That makes quite a difference doesn't it? Of course the separation was not a temporary mutually agreed upon separation, but a vindictive husband getting rid of a wife innocent of adultery. One mistranslated word has made countless numbers of people misunderstand what God was saying and that he was not changing his law, his morals, instead he was just restating it.

What has amazed me the most is that when I have presented this information to preachers they acknowledge it, but go ahead and teach what they always have. I have heard, "Well it's taught else where". If we ever got beyond that line they would be shown that the scripture is consistent with what I showed above. If a verse does not really teach something then it can not be used for that purpose. For example, Malachi 2:16 does not teach that God hates divorce. The Hebrew does not say that even though the English wrongly does.

The only times that a writ or bill of divorce was not required was when the marriage was broken by adultery or when God did not consider the marriage valid. Here are a couple examples of invalid marriages before God. There are more.

Ezra 9:2
"For they have taken of their daughters for themselves, and for their sons: so that the holy seed have mingled themselves with the people of those lands: yea, the hand of the princes and rulers hath been chief in this trespass."

Jude 1:7
"Even as Sodom and Gomorrha, and the cities about them in like manner, giving themselves over to fornication, and going after strange flesh, are set forth for an example, suffering the vengeance of eternal fire."

Ezra said they were "chief in this trespass". What was this trespass? It is against God's law to mix or mingle with other peoples. In Exodus 20:14 when it says, "Thou shalt not commit adultery" (adulteration) it also includes the mixing of cloth, farm animals, agricultural seed (hybridization) and the seed of different races of men. The Hebrew and Greek include the meaning miscegenation. That is certainly not taught in Bible schools today. The seventh commandment has a much broader meaning than most people today remember. Your great great grandparents may have known this truth. As you can see Jude mentions this as well in the phrase, "and going after strange flesh".

Due to some email I must add that a husband giving permission to another man to adulterate, mix seed, with his wife does not negate the command. Giving permission is an aspect that you can not find in scripture! I was very surprised to receive an email suggesting such wickedness!

1 Corinthians 6:9-11
"Know ye not that the unrighteous shall not inherit the kingdom of God? Be not deceived: neither fornicators, nor idolaters, nor adulterers, nor effeminate, nor abusers of themselves with mankind,
10 Nor thieves, nor covetous, nor drunkards, nor revilers, nor extortioners, shall inherit the kingdom of God.
11 And such were some of you: but ye are washed, but ye are sanctified, but ye are justified in the name of the Lord Jesus, and by the Spirit of our God."

In the Hebrew and Greek there is unity of doctrine on marriage, divorce and remarriage. Unfortunately the English translations do not show this unity.

Here is the definition for adulteration from an older dictionary. 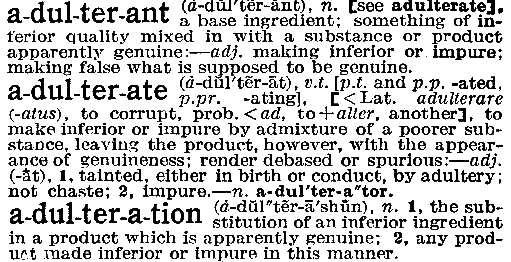 The Law of YHVH

What is the New Covenant?


Marriage, Divorce, Adultery and Putting Away


Other Laws and Precepts


The Importance of Israel