The Sacred Name of the Hebrew God

My son was doing a study on the Tetragrammaton and in the process looked up the word tetragrammaton in the dictionary. What he found in the 1931 Winston Simplified Dictionary was very interesting and I have scanned it in to the computer. You can read what he found below. 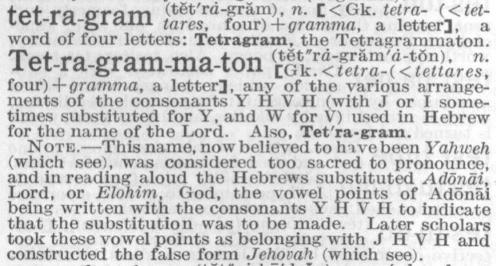 I do have a thought about the statement that the name of our God was considered too sacred to pronounce. I do not see this concept in the Scriptures. A search of the King James Version for the capitalized LORD and GOD found them 5,761 times. That means that Yah inspired the writers of the Old Testament to pen YHVH 5,761 times. There are also 52 occurrences of Yahh found in the Scriptures. How would a name that was too sacred to pronounce ever be glorified among the people of Yahweh (Yahavah) or even the nations?

The name of our God is sacred, but I think it was the modern translators who decided to substitute LORD and GOD for YHVH (YHWH). They say they did it because a certain group did not use the sacred name because it was too sacred to speak. Based on my study I tend to think that in reality that certain group did not want to hear our God's name or have anything to do with it and so created this idea that it was just too sacred to use. The translators were deceived and joined in this attempt to do away with the name of our God. Why would someone not want us to use the name of our God? Because there is power in the name of God. The true Hebrews never substituted the use of the sacred name.

Exodus 9:16 "But indeed for this purpose I have raised you up, that I may show My power in you, and that My name may be declared in all the earth".

When translating words and ideas one picks the best matching word or phrase found in the language one is translating to. When transliterating names one takes each letter of the name and finds a corresponding letter in the new language that will, make it possible to go backwards. It is nice to make the name sound the same as in the original language, but this is not the goal. That is why Jesus is so different sounding from Yahshua even though they are the same name.

It is important to be understood and to be patient while people learn about the sacred names. Sometimes I have wondered if our God, YHWH, has not protected His name from abuse during the times of our ignorance by temporarily hiding His name? At the same time a friend pointed out that Yah has continued the use of His name in our praises. Alleluia means Praise Ye Yah! LORD and GOD are not names, but titles. Even a "Satanist" could sing many of our songs that only use "Lord".

There is one other point, I found very interesting. This has to do with the Hebrew word hovah. You will notice that it is a part of the word Jehovah. Here is the definition from Strong's for hovah.

Our God's true name does not mean "I am ruin" or "I am destroyed". As the dictionary said above the name jehovah is a false form and we should abandon it's use. Some do dispute this idea. Note the source though. It is the same group who say the sacred name should not be used.

The Law of YHVH

What is the New Covenant?


Marriage, Divorce, Adultery and Putting Away


Other Laws and Precepts


The Importance of Israel